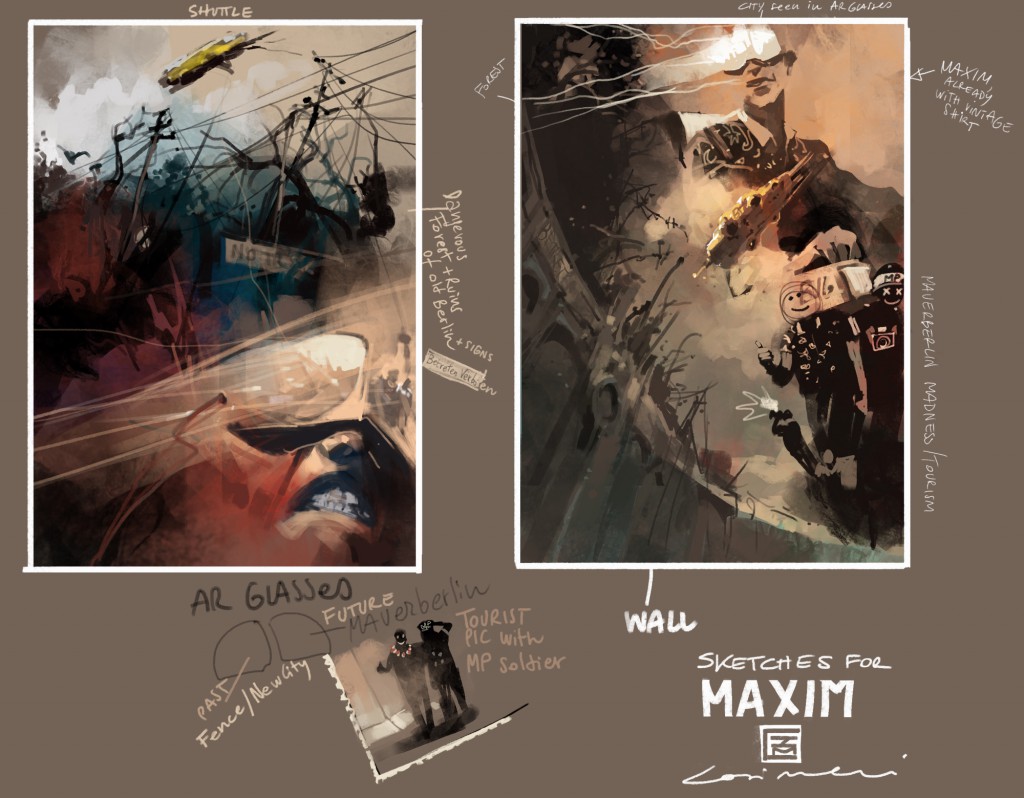 »This time it´s hard to say anything in particular, because I really like everything.
I defintely like the forest. Both versions, with wall and with the ruins.
Probably the one with ruines, that shows more forrest, is stronger, because you see (and feel) the wildness of it immediately.
But the Wall is also very strong.
I like the city in the eyeglasses.
It´s the first paining that shows a part of that city. Before it´s just Castorf and Manolo. I like that you also see the city in that picture, although the main focus is on the surrounding with wall and forrest.
So I tend to pick elements from the left sketch, but as said I like both.
The one on the left is very complex and dense. I would like that the viewer understands a little more, that maxim is sitting in the shuttle when he uses the glasses. But I don´t know if it´s possible to fit in some shuttles indications at the bottom, that are a little more obvious. I don´t want to ruin it, but your fingers will decide anyways. And we have a shuttle in the sky, so it´s in there.
And a little more of his face (or just the undercut haircut with almost no hair on the sides) would be nice, but again there´s so much, it´s all about details. Of course we don´t need complete faces in the paintings, but I like the idea that you can see and recognize obvious differences between the faces. And with this you probably would not recognize Maxim if you see him in a group of others. So a little more of the head (face or hair) probably on the left side could help, but these are again just details. The sketches totally works as it is. Both sketches are really strong.
Probably shuttle interiour elements and more face would not be possible, so I would go for a little more face if there´s anything I can say. I could also narrow my words down to this: Just keep on following your finger, he´s doing absolutely great and will find the right way with Maxim… So read my words and forget them and just let your finger rule the elements!
Thanks a lot for this, it´s marvellous. I can´t wait to see it grow or be finalized soon!

If you liked this story, you may also like: